The weather forecast for tonight (Saturday November 30 2013) is mostly cloudy. We won’t be able to see the sky.  Sorry, but the scheduled star party is canceled.  Better luck next month.

END_OF_DOCUMENT_TOKEN_TO_BE_REPLACED

November 20 was our annual elections meeting.  Jerry, Ben, Bart, and Tim were all elected to another term in their positions.  Thanks to all of you for putting in the hours to keep things going at RAC.

END_OF_DOCUMENT_TOKEN_TO_BE_REPLACED

Our August 31 star party was held!

END_OF_DOCUMENT_TOKEN_TO_BE_REPLACED

We had a terrific night in Washington, DC last Friday night, at Astronomy Night on the Mall. RAC joined NOVAC (Northern Virginia Astronomy Club) and several faculty and students from Hofstra University and the University of Maryland for this annual event. It’s the third time it’s been held, and RAC’s first.

Jerry Hubbell, Linda and Bart Billard, and Terry Barker brought telescopes to the event, and we set up next to the Washington Monument. What a great location this was, as a good portion of the attendees were tourists, who just happened to be walking by,  saw a crowd on the mall, and decided to investigate.

All told, we had about a dozen telescopes set up from 5 pm to 11 pm, and an estimate of the number of people that attended is about 1,000 plus. I know I had a constant stream of people looking through my 4 inch Celestron from about 7 pm to 11. I talked to so many people, my voice was hoarse towards the end.

One thing that puzzled me, was how the people found out about the event. So, I started asking people, and here’s what I found out: about a third of them were on a mailing list from either Hofstra or UM. Another third found out through Meet Up Groups or just browsing the internet. And the rest just saw a crowd when they were passing by–so, the larger the crowd got, the more people were attracted to the event. I managed to attract a few people myself, by virtue of the t-shirts the club had made, that showed the RAC logo on the front and had large text on the back with the name of the event. I walked around a little, looking for something for dinner, and people noticed the shirt and asked me about it.

Bart Billard gets the award for drawing the most enthusiastic response from the crowd–a man started yelling to his companions “Get over here and see this–you’re not going to believe it. And I’m not going to tell you what it is.” It was Saturn, of course.

And Linda gets my undying gratitude for keeping us supplied with a basket full of fresh strawberries that she brought for snacks. She brought them around periodically, just when we needed a pick me up. 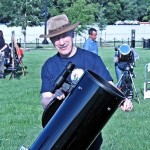 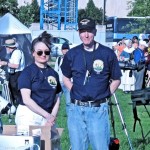 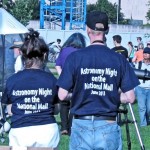 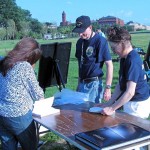 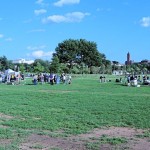 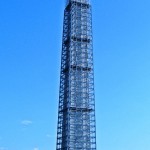