I am a past RAC President and an RAC astrophotography POC. I am an active Asteroid observer and contributor of astrometry data to the Minor Planet Center (MPC). I am also a member of the Association of Lunar and Planetary Observers (ALPO) and the American Association of Variable Star Observers(AAVSO). 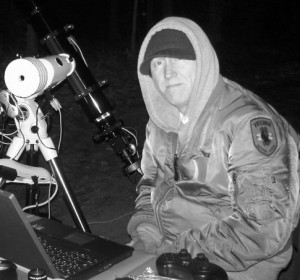 I received my first telescope (a Tasco 60mm Refractor with an alt-az mount) when I was 14. I had used binoculars prior to that but I was in heaven (literally) with this new scope. As a teenager, I used that scope for a couple of years and managed to buy another 60mm Refractor on a small manual GEM mount that enabled me to track the Moon very well. At that time all I cared about was looking at the Moon and the planets (I still remember to this day my very first view of Saturn). I managed some rudimentary photos using eyepiece projection into my Polaroid instant camera. I was truly amazed at being able to pick out Tycho and the Alphonsus/Arzachel region. I remember referring to the latter as the ‘keyhole’ craters in my observing notes because of the way it looked in those crude Polaroid photos. I have always had a special fondness for the Moon and still do today.

I got away from observing after High School and even though I took a basic astronomy course in college, didn’t use a telescope until 1986 when I bought my first SCT: a Meade 2120 LX5 from Company Seven, located in Maryland. Boy, I was really blown away by its size and heavy mount. Also, the hand controller was very nice. I used that instrument regularly as a purely visual tool for several years in the late 80’s and early 90’s before I moved on to other hobbies (flying for one).

Ten years passed where I didn’t use my Meade SCT once. A few years ago, I started thinking 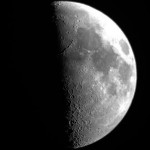 about how computers had improved the instrumentation used in small aircraft and looked into what had been going on with amateur astronomy and what was available. I immediately zeroed in on the EQ6 mount and the large (5-6 inch) APO Refractors that are available today at a reasonable price. I was impressed with the availability of the ASCOM standards, and EQMOD open source software to control the EQ6 mounts. I have been enjoying my telescope system over the past few years concentrating on minor planet astrometry, photometry, and on high-resolution lunar imaging. I am a member of ALPO, AAVSO, and I have obtained my observatory code from the Minor Planet Center. I have learned to tolerate the cold in pursuit of that elusive perfect image. 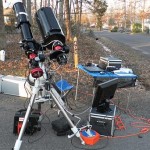 I presently reside in Locust Grove, Virginia with my wife Michelle, 4 children out of 8 that are still at home, and 4 dogs of various types and ages. I have my degree in Electrical Engineering Technology. I have been flying for over 20 years and I serve in the Virginia Defense Force (VDF) as a pilot in C Company Aviation Battalion performing search and rescue, surveillance and disaster recovery missions. My VDF company is based at Orange County Airport. I also work for Dominion Virginia Power previously in the Nuclear Design Engineering group as a Nuclear Instrumentation & Controls Technical Specialist. I do work on all nuclear plant protection and control instrumentation and also on the plant computer systems (hardware and software). I am now a part of the IT department. I have over 30 years experience in the nuclear and utility Industry and have worked on all manner and shape of analog and digital nuclear and non-nuclear instrumentation.