I have been a past RAC president many times and have taught Astronomy at the University level. I am a frequent public outreach speaker. Also, I am an astronomy researcher and astrophotographer. Myron is currently inactive. 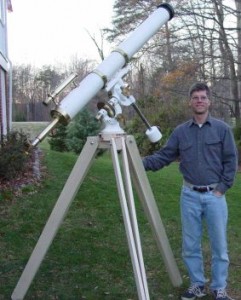 I recently acquired an antique 4.5″ f15 refractor from a man who got it from the widow of the man who made it. The telescope is about 60 years old and is very well made with lots of brass. The man that made it, Thomas Wilbur Stone, poured his own iron into sandcast molds for the equatorial mount, turned and milled his own brass gears, and according to the person I bought it from, made the main lens as well. The ad for the telescope said the main lens was poor. Indeed, as I first looked through it, I could see it had some serious problem optically. The stars all had tails and were flared grossly to one side. Due to the poor optics and very heavy mount (the guy didn’t want to ship it), he accepted my really low offer.

Well, after some reading on objective lenses, I took the main lens apart and closely examined its two elements. It appeared to be a standard doublet with the thin crown element up front, and the thicker flint element behind. It was also air-spaced and had numerous confusing markings all along the edges of both lenses as if they had been dissasembled many times in the past decades.

I cleaned them and decided on a certain orientation keeping the crown element forward (closest to the sky). I also aligned the two elements with the axis of the telescope tube using a cheshire eyepiece. Looking through the telescope showed the problem was still there. Almost ready to accept the lens was bad, I kept thinking why so much precision would go into making such a beautiful telescope – but place a terrible lens in it. I decided to reverse the lens – that is, to place the flint element towards the sky. The result was a spectacular improvement. Nearly perfect color correction and pinpoint stars. Star testing at high power gave perfect Airy patterns with only a hint of spherical aberration! The lens is a gem, and consistent with the workmanship on the rest of the telescope!

I gazed at Saturn for a long time – at 175X its rings were magnificent. Cassini’s Division was ink black, and the globe was belted with subtle hues of yellow and brown! Five pinpoints of light attended the planet (its moons)!

I still need to do some restoration work the mount needs painting, and I would like to make a nice tripod for it but I plan on using this scope for our clubs outreach programs. I will also bring it to a meeting within the next couple of months. 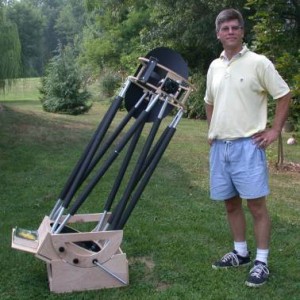 As an avid telescope builder, I read with great interest Richard Berry and Dave Kriege’s landmark book on building a large Dobsonian. I was so inspired by their work that I built two classical truss tube Dobsonians — a 12.5″ f6.8 and then a 16″ f4.5. Although I am able to transport these telescopes in my Honda station wagon, they are nonetheless large and bulky. I wondered just how much further I could push the envelope of portability while still maintaining a fairly conventional design using tried and true methods from my previous experience. About this time George Uhl, a friend who has a fine 14.5″ f4 sonotube Dobsonian lamented his increasing difficulty in getting away to dark skies. His scope was purchased from John Hudeck, founder of Galaxy Optics. The telescope was John’s personal scope for a number of years before he moved up to a larger aperture. While optically excellent, it was nonetheless impractical to transport due to the large one-piece tube, ground board, and high-sided one-piece rockerbox. Certainly, it would not fit on an airliner, which was on George’s wish list for a travel scope. And so during a stargazing trip to Virginia’s Shenandoah Mountains, George and I hatched a plan to rebuild this scope into a portable truss tube telescope that would be easy to transport and be possible to take through airports. I would design and build it, and George would pay for the materials (and throw in a 6″ f/15 Jaegers achromat to boot).

The first component I made was the mirror box. I used ½ inch HVSC Birch Plywood from a local hardware store. The dimensions are 17X17X6 inches. The idea was to keep the thickness down as much as possible for transport. A thin mirror box would also allow for rapid thermal equilibrium. In the classical truss-tube dobsonian, the mirror box is made tall enough so the balance of the telescope is at the top of the box. Placement of the side bearings is possible at the balance point thereby eliminating the need for counterweights. However, with the low profile mirror box I built, the balance point of the telescope was about 8-inches above the box. To achieve balance without using too much counterweight, I used large 18-inch diameter altitude bearings and mounted them as far up the mirror box as possible while still maintaining enough contact with the box for rigidity. This got me to within 4 inches of the balance point. The rest of the imbalance was taken care of by attaching two extension springs mounted on each side of the rockerbox. One end is attached to the altitude bearing, while the other mounts to the bottom edge of the base of the rockerbox. The are aligned in such as way that when the scope is pointed straight up, there is no tension and they point to the center of rotation of the truss-tube. As the scope is lowered, tension gradually builds up that counterbalances the increasingly top-heavy upper end. Trial and error resulted in a nearly perfect match. The slight residual imbalance can be easily taken out by using a “roostertail”, a thin plywood plate inserted between the mirror box and mirror cell that supports a small amount of counterweight, such as a copy of Burnham’s Celestial Handbook. To allow easy installation and removal of the side bearings, I used threaded inserts which accept 1/4-20 knobs. Three knobs hold each bearing to the side of the mirrorbox. The front of the box is a thin ½ inch plywood webbing, which adds considerable strength and resists flexure. In each corner behind the webbing are two threaded “T” nuts, which accept the threaded rod segment which protrudes from the end of each truss pole. In this way, the truss poles can be threaded into the mirrorbox.

Finally, in each of the bottom corners of the mirrorbox is a 5/16″ threaded insert which allows the mirror cell to be mounted to the bottom of the mirrorbox. The mirror cell is simple but functions well. It consists of a ½” plywood plate 17X17 inches, and attached is a conventional 9-point flotation mirror support. Four holes at the corners allow a 5/16″ threaded rod to attach the cell to the mirror box. Collimation is done using three Allen screws in a conventional manner. A small muffin fan draws air around the mirror to aid in cooling.

The secondary cage was designed to be light and to have a thin profile so that it would fit in a trunk along with the main mirror. The cage’s most unconventional feature is the curved vane for the secondary support. I made it according to Gary Seronik’s article in S&T, but used heavier 18-gauge steel with a width of two inches. A dew guard is mounted to the back of the 2.6-inch secondary. The 2-inch JMI Crayford focuser is baffled at the bottom of the drawtube, and across from this focuser is a Kydex light baffle. The effect is a well-baffled telescope that can be used near local light sources without loss of contrast from scattered light. I mounted a Telrad to the plywood rings, which just happened to be separated by the same distance as the mounting holes on the Telrads base.

The truss poles posed some difficulty to transport effectively. They had to be lightweight, yet still, minimize flexure. A full-length 44″ pole would not fit well in a suitcase, so I decided to use a telescoping pole system of some kind. After some experimentation, I decided to try closet rods. They come in a number of lengths, are fairly light, and inexpensive. There is enough friction so they stay together without changing length. To attach them to the mirror box, I placed a wooden dowel into one end of the rod. The dowel had a hole drilled through it into which I placed a round-head screw. Using Locktight glue and a nut to tighten the screw to the dowel, I screwed this entire assembly into the lower end of each truss pole. Therefore, each pole can simply be screwed into the mirror box and breaks apart into two pieces for easy transport.

The groundboard is fairly conventional and only ½” thick. The rockerbox is modular, with the front and back boards removable. This allows the hinged sideboards to fold flat, thereby lowering the profile of the groundboard/rockerbox assembly to only 3 inches! The sideboards are ½ inch plywood, as is the bottom of the rockerbox.

The entire telescope fits in one medium-sized Pelican case, and two suitcases-somewhat more than originally hoped for but still practical. The entire telescope fully assembled weighs only 55 lbs. The heaviest component – the mirrorbox – weighs 28 lbs. Before I gave the finished telescope back to George, I had several opportunities to try it out. The telescope easily fit into the car and set up within a few minutes. Using it was a pleasure; it had that nice buttery smooth feel of a well-built and balanced Dobsonian. The telescope responds nicely to tracking and slewing movements applied to the secondary cage. There is very little “elasticity” despite the lightweight design. The images of stars were sharp and the lack of noticeable diffraction effects very pleasing.

As of this writing, George is observing the heavens from some high mountains in Colorado. Along with his family – on the airplane with him was a 14.5″ f4 telescope!