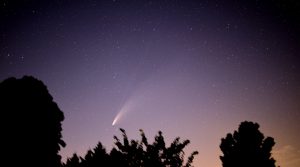 The skies were nice last night at our club star party. Three of us from Rappahannock Astronomy club, and 11 guests, were at Caledon.

The sky cleared up nicely as it got dark. The seeing was pretty shaky, but there are still pretty things to see.

I was able to show a pretty view of Mars about 1 degree from the Moon. I found a magnification that showed Mars as a brilliant point on the left, with the crescent limb of the Moon on the right of the field of view.

One visitor was taking astrophotos camera alone, and had enough resolution to magnify an image of Orion to show a nice amount of nebulosity in the Orion nebula.

At about 10:00 the clouds suddenly rolled in.

Thanks to everybody who came out.
— Glenn