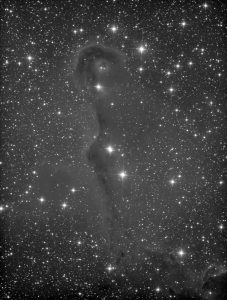 A good night last night.  We started with scattered thin clouds, which frustrated me when I tried to locate some galaxies behind them.  But the night got clearer as it went on.

From RAC we had 4 families.  We also had 4 new families, all of whom brought their own telescopes, some for the first time setting them up.  So we had a fun time visiting with new folks and getting familiar with new gear.

I hoped to spot Mercury, but it was behind the trees before
it was dark enough to look.  Perhaps I should have tried
using my telescope to scan above the treetops just after
the Sun was safely blocked by the trees.  We probably
got a glimpse of the shadow of Io crossing Jupiter,
but nobody had the resolution to view the recent north polar vortex on Mars.

Seeing was off and on, with some moments that one person described as looking through Jello, and some nice crisp moments.  While watching for Io it was easy to see how the seeing changed from moment to moment as Jupiter’s clouds bands flickered in and out.

Our Next Meeting is:
Wed, June 17, 2020
via Zoom Video Conferencing